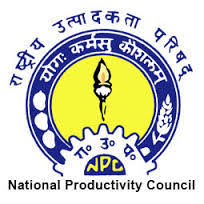 It is also called as fourth industrial revolution. It is emerging globally as powerful force and is being called as next industrial revolution. It is characterized by increasing digitization and interconnection of products, value chains and business models.
Industry 4.0 means convergence of real and virtual worlds. It is the next phase in bringing together conventional and modern technologies in manufacturing.  It will result in “Smart Factory”, which is characterized by versatility, ergonomic design, resource efficiency and direct integration with business partners.

NPC is a national level autonomous organization under Department of Industrial Policy & Promotion (DIPP), Ministry of Commerce & Industry to promote productivity culture in India. It was established as registered society on 12th February 1958 by Government to stimulate and promote productivity and quality consciousness across all sectors in the country.
It is a tri-partite non-profit organization (NGO) with equal representation from government, employers and workers’ organizations. It also has representatives from technical and professional institutions including members from local productivity councils and chamber of commerce on its Governing Body.
It also implements the productivity promotion schemes of Government and carry out programmes of Tokyo based Asian Productivity Organization (APO), an inter-governmental body of which India is founder member.