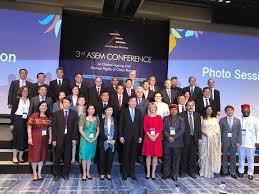 The third ASEM (Asia-Europe Meeting) Conference on ‘Global Ageing and Human Rights of Older Persons’  was held in Seoul, capital of South Korea. It was jointly organised by South Korea and National Human Rights Commission of Korea.

The 3-day Conference was attended by International Institutions including United Nations, Regional Institutions such as UNESCAP, UNECE, European Union (EU), ASEAN, GANHRI and also International NGOs, Experts etc.  Indian delegation was led by Union Minister of Social Justice and Empowerment Thaawarchand Gehlot. The Conference reaffirmed universal value of human rights of older persons, shared information on discrimination against elderly and exemplary cases of long-term and palliative care in Asia and Europe. It also discussed operation and tasks of ASEM Global Ageing Centre as implementing institution for mutual cooperation among ASEM members for protection and promotion of human rights of older persons. The experience gained from this Conference will be beneficial for Policy formulation and implementation for welfare of senior citizens.

ASEM is informal process of dialogue and cooperation that brings 53 entities – including 51 countries (including India) from Asia and Europe and two regional bodies European Union (EU) and ASEAN.  It was officially established in March 1996 at the first summit in Bangkok, Thailand. ASEM represents around 62.3% of the world’s population, 57.2% of the global GDP and almost 60% of the world’s trade. The dialogue addresses political, economic and cultural issues between the two regions. It also seeks to strengthen relationship between the two regions in a spirit of mutual respect and equal partnership.