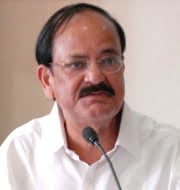 Former union minister Muppavarapu Venkaiah Naidu (68) was elected as 13th Vice President of India. He will succeed Hamid Ansari, who held the position for two consecutive terms of 5 years.
With this victory, BJP has occupied top three constitutional posts of India- President, Vice-President and Prime Minister.

Over 98% voting was recorded in the 2017 vice-presidential election. 98.21% polling was registered for the election with 771 out of 785 MPs casting their vote, 11 votes were found to be invalid. 381 votes was the quota set to win the polls. M. Venkaiah Naidu emerged victorious by winning 516 votes, whereas opposition nominee Gopalkrishna Gandhi has secured 244 votes.

Venkaiah Naidu was born on July 1, 1949 in Nellore district of Andhra Pradesh in farmer’s family. He holds a law degree with a specialisation in international law from the Andhra University College of Law in Vishakhapatnam.
He had first entered in the mainstream politics with 1972 ‘Jai Andhra Movement’  and later joined BJP in 1980. He won the assembly election twice in 1978 and 1983 from Udayagiri constituency and became the Rajya Sabha MP thrice in 1998, 2004 and 2010. He was elected as the national President of BJP in 2002.
He served as a cabinet minister both NDA governments under the Atal Bihari Vajpayee (1999-2004) and Narendra Modi (2014-present). He was Cabinet Minister of Information and Broadcasting, Minister of Urban Development and also as a Parliamentary Affairs Minister under Modi government.

The Vice-President is selected through a secret ballot by the members of the electoral college consisting of the members of both Houses of Parliament (Lok Sabha and Rajya Sabha) in accordance with the system of proportional representation by means of the single transferable vote. The nominated Members of Rajya Sabha as well as of Lok Sabha are also eligible to be included in the Eeectoral college and, therefore, are entitled to participate in the election.