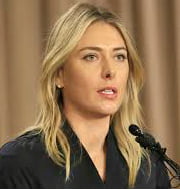 Maria Sharapova, a five-time Grand Slam champion and former WTA World No.1 has recently announced her retirement from professional Tennis.

The 32-year-old Tennis icon from Russia has won 36 WTA titles and held WTA World No.1 rank for continuous 21 weeks. She won her first Grand Slam at the age of 17, when she won the Wimbledon title in 2004. She had also won her Career Grand Slam.