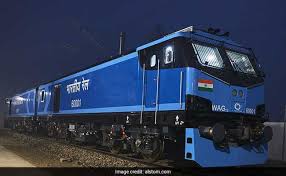 India’s first high-speed electric locomotive with 12000 horsepower (HP) engine has been flagged off by Prime Minister Narendra Modi from Madhepura Electric Locomotive Factory in Bihar. It is first big Make-in-India project developed and completed by Indian Railways in collaboration with French firm Alstome.

Capacity and Speed: India’s first high-speed electric locomotive has 12000 horsepower (HP) engine with maximum speed of 110 km per hour. With this, India joins elite list of countries, including Russia, China, Germany and Sweden that have 12,000 HP and above capacity electric locomotives. Till now, most powerful electric engine in Indian Railways was of 6,000 HP.
Usage: The high horsepower electric locos are equipped with IGBT (IGBT based propulsion technology) based propulsion technology. They will have the ability to endure the tough Indian climate and will be pressed into service as freight trains. They will be used to transport coal and iron ore.

Significance: The induction of heavy-haulage electric locos will help to decongest saturated routes by improving speed and carrying capacity of freight trains of Indian Railways. With 100% electrification, they will bring down operating costs of Indian Railways and also significantly cut down greenhouse gas emissions.

Indian Railways had entered into agreement with France’s Alstome for manufacturing 800 high-speed locomotives. Under this pact, first five electric engines were to be imported while remaining 795 will be manufactured in India under Make in India imitative over a period of 11 years.
The total cost of this project is Rs 20,000-crore project, which includes setting up the factory at Madhepura (Bihar) and two loco maintenance depots at Saharanpur (Uttar Pradesh) and Nagpur (Maharashtra) at cost of Rs 1,300 crore. The average cost of each locomotive is estimated to be Rs. 25 crore.