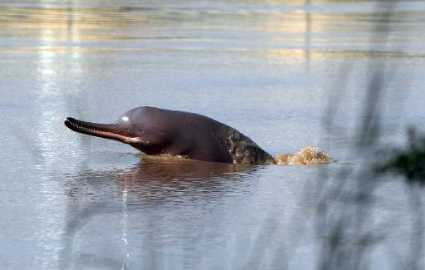 National Dolphin Research Centre (NDRC) will be set up on the banks of the Ganga river in Patna University campus in Patna, capital of Bihar. It will India’s and Asia’s first Dolphin research centre. The announcement for the centre was made on the occasion of Dolphin day (October 5), observed in Bihar for protection and conservation of Gangetic river dolphin to create awareness to save endangered species. NDRC will play important role in strengthening conservation efforts and research to save endangered mammal whose population is decreasing. Bihar is home to around half of the country’s estimated 3,000 dolphin population.

Gangetic river dolphin (scientific name: Platanista gangetica) is one of the four freshwater dolphin species in the world. The other three are found in Yangtze river, Indus river in Pakistan and Amazon river. Gangetic river dolphin species are found in India, Bangladesh and Nepal.
Gangetic river dolphin is India’s national aquatic animal. It is almost completely blind and finds its way and prey using ultrasonic echoes, with sound being everything for them to navigate, feed, escape danger, find mates, breed, nurse babies and play.
Gangetic Dolphin’s presence signals healthy river ecosystem. Dolphins prefer water that is at least 5-8 feet deep and are usually found in turbulent waters where there is enough fish for them to feed on. They prefer deep water with adjoining shallow water and live in zone where there is little or no current that helps them save energy.
Threats: Entanglement in fishing nets, hunting for their oil and meat, poisoning of water supply of river from industrial and agricultural chemicals. They are facing most significant threat from building of dams along the upper course of their habitable rivers. It causing the segregation of populations and has a narrowed gene pool in which dolphins can breed.
Protection Status: Gangetic river dolphins fall under Schedule I of the Indian Wildlife (Protection) Act and have been declared an endangered species by the International Union for Conservation of Nature (IUCN).
Conservation Program: Environment Ministry had launched Ganges River Dolphin Conservation Programme in 1997 to build scientific database of their population status and also study their habitat quality of the dolphins’ distribution range. Vikramshila Gangetic Dolphin Sanctuary located in Bihar’s Bhagalpur district of Bihar is India’s only dolphin sanctuary is spread over 50 km along the Ganges