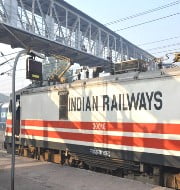 The EPC contracts were awarded as part of a strategy to speed up the electrification of railway lines under ‘Mission Electrification’ plan unveiled November 2016. So far only 42% of the lines are currently electrified. The Rail ministry is planning to increase its electrified network to 52,400 rkm by 2021. The Indian Railways is expecting to cut its fuel bill by Rs. 3,300 crore annually by 2020-21, by electrifying 90% of all broad gauge tracks under ‘Mission Electrification’ plan. In 2017-18 Budget, it was announced the Railways would tap the EPC route for expediting electrification projects.

Indian Railways consumes 2% of the country’s total power generation. The power could be effectively utilized in other sectors. The Mission Electrification plan will help in reducing the energy bill of railways considerably. It would also make the travel through Railways faster.