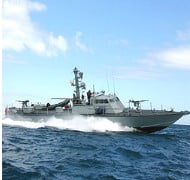 Bharati Defence and Infrastructure Ltd (BDIL) delivered high-speed interceptor boat ICG C-162 to Indian Coast Guard (ICG) at BDIL jetty in Mangaluru, Karnataka. It is fifth interceptor boat delivered by BDIL’s Mangaluru shipyard to ICG. The sixth boat will be delivered after three-and-a-half months of the delivery of the fifth boat.

The vessel will be based at Kochi, Kerala and will be used for patrolling purposes. It can accommodate 11 crew members. The vessel was launched in January 2018 and has successfully completed the harbour and sea trials.
It is 28 metres long with aluminium hull and weighs about 60 DWT. It is designed for a speed up to 35 knots. It is fitted with new generation of Arneson Surface Drive propulsion system, propelled by two engines of 1650 kW each.