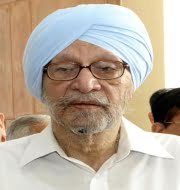 World famous prominent Punjabi writer, novelist and short story writer and Jnanpith awardee Gurdial Singh passed away at Bathinda, Punjab. He was 83.
He was one of the greatest writers of Punjabi Literature and had focused on the economically and socially marginalised people in rural Punjab in his short stories and novels.