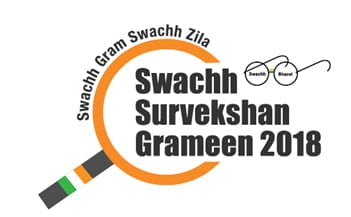 Prime Minister Narendra Modi recently conferred Swachh Survekshan Grameen Awards 2018 to top ranked states and districts. Haryana was ranked as best State, Satara District of Maharashtra was ranked as best district. Uttar Pradesh was rewarded for maximum citizens’ participation.
The awards were given at concluding session of Mahatma Gandhi International Sanitation Convention at Rahtrapati Bhawan Cultural Centre. The rankings were based on the National Swachh Survekshan Grameen 2018 of the Union Ministry of Drinking Water and Sanitation.

The Ministry of Drinking Water and Sanitation had commissioned Swachh Survekshan Grameen-2018 (SSG 2018) through an independent survey agency to develop ranking of all districts of India on the basis of quantitative and qualitative sanitation (Swachhata) parameters. This ranking was done based on a comprehensive set of parameters including surveys of public places like schools, Anganwadis, PHCs, Bazaars, Panchayat. It also took into consideration citizen’s perception of Swachhata and their recommendations for improvement of program and data from SBM-G. As part of this survey, 6786 villages in 685 districts across India were covered. 27,963 public places namely anganwadis, schools, PHCs, bazaars and religious places in these villages were visited by an independent agency for survey.