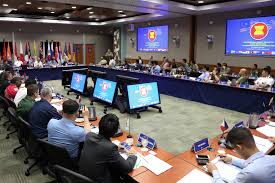 The 12th ASEAN Defence Ministers Meeting (ADMM) and 5th ADMM-Plus was held on October 19 and 20, 2018 Singapore. ADMM and ADMM-Plus serves as key Ministerial-level platforms in regional security architecture for promoting strategic dialogue and practical cooperation between ASEAN and its partners. The conferences were attended by defence ministers from India, Australia, China, Japan, New Zealand, South Korea, Russia and US. India was represented by Defence Minister Nirmala Sitharaman. This was second time Singapore has chaired ADMM since its establishment in 2006 and first time to chair ADMM-Plus since its establishment in 2010.

ADMM-Plus is platform for ASEAN and its eight dialogue partners to strengthen security and defence co-operation for peace, stability, and development in the region. Its objective is to promote mutual trust and confidence between defence establishments through greater dialogue and transparency. The inaugural ADMM-Plus was convened in Hanoi, Vietnam in 2010. The defence ministers then had agreed on five areas of practical cooperation, including maritime security, counter-terrorism, peacekeeping operations and humanitarian assistance.