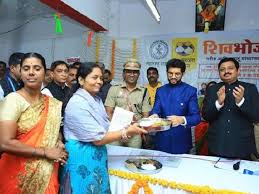 The state government of Maharashtra has launched the ‘Shiv Bhojan’ scheme on a pilot basis, which aims to provide a meal to the poor for Rs 10. The scheme was launched on the occasion of the 71st Republic Day celebrations on Sunday, 26th January 2020. As a part of one of the promises made by the Shiv Sena at the time of the state assembly election, the scheme was launched.

Under the scheme, thalis or lunch plates comprising of two chapattis, one vegetable, dal, and rice would be available to the people at designated centers in all districts between 12 noon to 2 PM. Nearly 50 ‘Shiv-Bhojan’ outlets were set up on a pilot basis, which will be extended to other parts of the state. All the outlets are going to serve a minimum of 500 thalis per day. The remaining fund needed for providing food will be given as a grant to the district collectorate by the state government.