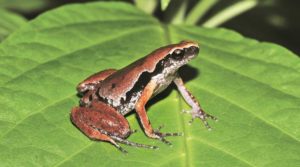 A team of scientists from Delhi University (DU) and Wildlife Institute of India (an autonomous institution under Union Ministry of Environment Forest and Climate change), in collaboration with researchers from the United States and Indonesia, have discovered a new species of ‘Paddy Frog’ from Northeast India, primarily in Assam.