Rupee for first time hit historic low of Rs. 70 mark against US dollar 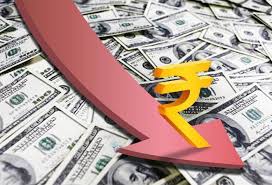 Indian rupee for first time in history plunged to record low of Rs. 70.07 against US dollar on 14 August 2018. However, it recovered later at around Rs. 69.84 after heavy intervention by Reserve Bank of India (RBI). This sudden deprecation of rupee is similar to fall of other currencies of emerging markets triggered by crash in Turkish currency lira.

Turkish lira has been in free fall following political and economic problems in Turkey, combined with fresh trouble on the external front. It has slid by almost 50% against dollar in past one year. The primary reason for ongoing rout in lira is poor economic management by government of President Recep Tayyip Erdogan. Turkish economy is overheating due to soaring inflation (has reached annual rate of nearly 16% in July 2018), mounting levels of foreign debt and very high current account deficit (CAD). Moreover, both Turkish government and central bank are facing serious loss of credibility. There are also signs of massive bubble in construction sector of Turkey, which is further threatening country’s already fragile banking system.

Rupee has been on downslide in 2018 and has slipped 9% in 2018 as foreign investors sold $6.8 million and $5.15 billion in equity and debt markets respectively. Besides, Turkey’s currency crisis has triggered for fresh selling across emerging markets and further down sliding rupee sharply. Rupee is one of the worst performing emerging market currencies and hardest hit in Asia due fall in Turkish lira. It is depreciating due to external factors and at this stage it is not serious economic issue as depreciation is in line with other currencies. In comparison to many other currencies, rupee has not seen that much depreciation. In future, if global currencies show further meltdown, rupee will also fall further.

On Imports: Weak rupee can act as kind of import tax. Due to fall in rupee, importers (especially oil companies and other import-intensive companies) will be hardest hit as cost of importing goods or capital goods in to India will increase. They will have to pay more Indian rupees to buy an equivalent amount of dollars.
On Exports: Exporters benefits from weak rupee as they get more rupees while converting their dollar export earnings into Indian currency. India’s software exporters will benefit from rupee’s decline.
On Overall Economy:  RBI assess trend in rupee vis-à-vis emerging market currency pack and if all emerging market currencies are depreciating, it may further allow rupee to weaken to protect export competitiveness. However it will make imports costlier. It will increase oil prices (India is world’s third biggest oil importer and ships in about 80% of its crude oil requirements) which may exert further exert pressure on CAD and cause inflationary pressure. It may force RBI to hike interest rates to check inflationary pressures. It will also play important role in attracting long term foreign direct investment (FDI) to support make in India agenda, which has not yet taken off and one of the reason being the strong rupee value.