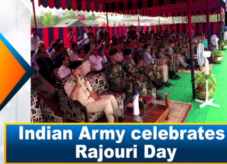 Rajouri Day was celebrated on April 13 to commemorate the bravery and valour of the soldiers who laid down their lives for the liberation of Rajouri district.

The Partition of India and the accession of Jammu and Kashmir to India in October 1947 was followed by the First Kashmir War between India and Pakistan. The Pakistani raiders, along with the rebels and deserters from the western districts of the state, captured Rajouri on 7 November 1947.

More than 30,000 Hindus and Sikhs living in Rajouri were reportedly killed, wounded or abducted.

Rajouri was recaptured on 12 April 1948 from rebels and Pakistan Army personnel who had infiltrated from across the border by the 19 Infantry Brigade of the Indian Army under the command of Second Lieutenant Rama Raghoba Rane.

Having destroyed most of the town and killing large number its inhabitants the captors had fled by the time Indian Army entered the town. After the arrival of the Army, some 1,500 refugees who had fled to the hills, including women and children, returned to the town.

‘Rajouri Day’ is celebrated on April 13 every year to commemorate the bravery and valour of the Indian Army soldiers who laid down their lives for the liberation of Rajouri district from rebels and Pakistan Army.