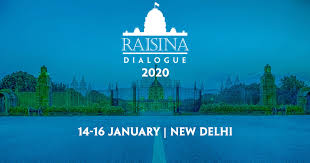 The multilateral conference that has emerged as India’s flagship conference since its inception in the year 2016 on geoeconomics and geopolitics is organized annually in New Delhi. In collaboration with the Ministry of External Affairs, the Conference is organized by the Indian independent think tank- Observer Research Foundation (ORF).  The multi-stakeholder dialogue is structured for cross-sectoral discussion and is committed towards addressing the challenging issues arising in the global arena.

The 2020 Raisina Dialogue will be conducted in New Delhi from 14th-16th January 2020. Over 150 speakers involving the head of state and cabinet ministers, members of the leading global media houses and academics from around the globe will be delivering a speech during the three-day discussion.

Some of the top International Diplomats delivering a speech in this year’s conference will be:

Some top executives from private sectors will also be delivering their speeches, such as Nandan Nilekani, and Gaurav Dalmia.

From India’s Union Cabinet, S.Jaishankar (Minister of External Affairs), Piyush Goyal (Minister of Railway and Commerce & Industry) and Smriti Irani (Minister of Women and Child Development) will be delivering their speeches. General Bipin Rawat and the Chief of Indian Navy Staff, Admiral Karambir Singh are also expected to participate in the discussion as speakers.
Raisina Dialogue FAQ