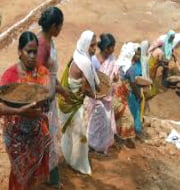 Punjab Government has established a special MGNREGA cell to coordinate effective implementation of National Rural Employment Guarantee Scheme in the state.
It has been established by Punjab Rural Development and Panchayat Department at Chandigarh with an outlay of 233 crore rupees.
This cell will monitor implementation of Union Government’s flagship 100 days employment guarantee scheme of MGNREGA.
It will also monitor the wage rate under MGNREGA which has been fixed by Union Government on the basis of consumer Price Index- Agricultural Labourers (CPI-AL) which is implemented on 1st April every year and will be applicable for whole financial year.
It should be noted that all the districts of Punjab are being covered under MGNREGA with effect from 1st April, 2008.
The recent wage rate has been revised from 202 rupees to 210 rupees with effect from 1st April 2015. The wages will be directly transferred by state government in the bank accounts of the beneficiaries from 15th September 2015.