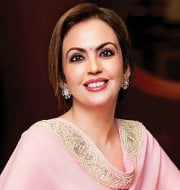 Nita Ambani, Founder and Chairperson of Reliance Foundation has been nominated as a candidate to be a new member of the International Olympic Committee (IOC).
She is the first Indian woman to be nominated to the IOC and is being considered in the category of volunteers who represent the IOC and Olympic Movement in their country.
If she gets elected at the IOC Session scheduled from August 2 to 4, 2016 at the 129th IOC Session in Rio de Janeiro, she will become the first Indian woman to be on the apex sporting body.
Sir Dorabji Tata was the first Indian representative in the IOC while Raja Randhir Singh was a member from 2000-2014 and is currently a honorary member of the IOC.
Nita Ambani spearheads all sports initiatives of Reliance Industries’, notably cricket, football, kabaddi, basketball, tennis and golf either through company, foundation or its joint ventures.