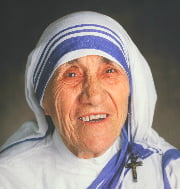 Mother Teresa, a Roman Catholic religious sister and missionary was proclaimed a Saint by Pope Francis in a ceremony at the Vatican.
She was canonised at the ceremony held in St Peter’s Square in Vatican. Indian delegation was represented by Union External Affairs Minister Sushma Swaraj.
With this, Mother Teresa became the fourth Indian to be canonised as Saint. Others are Father Kuriakose Elias Chavara, Sister Alphonsa and Sister Euphrasia.
The list also includes Saint Gonsalo Garcia of Portuguese parentage who was born in India and is considered an India born saint.