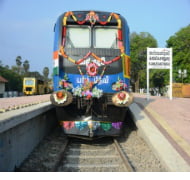 Indian Railway’s construction company (IRCON) has restored the rail track between Jaffna and Kankasanthurai in North Sri Lanka.
This restored commercial Yal Devi Express service was formally inaugurated by Sri Lanka’s Transport Minister Kumara Welgama.
This 18 kilometer track passes through the high security zone which was freed from the control of Tamil tigers in 2009.
Background
The entire rail line between Colombo and the Northern part of Sri Lanka was destroyed in the late 1980s by the LTTE.
India’s IRCON is playing important role in rebuilding the 252 km railway track on this route. Indian government had provided a line of credit of 800 million dollars for these projects. In 2014, the line upto Jaffna was made operational after it was restored.
Facts about Indian Railway’s construction company (IRCON)