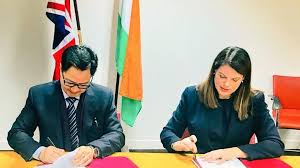 India and United Kingdom (UK) have signed two Memorandums of Understanding (MoUs) dealing with return of Indians residing in Britain as illegal migrants and sharing of criminal records and intelligence.
The MoUs were signed by India’s Minister of State (MoS) for Home Affairs Kiren Rijiju and UK’s Minister of Immigration Caroline Nokes in London.

MoU on return of illegal Indian migrants: It paves way for quicker and more efficient process for documentation and return of Indians who are illegally residing in United Kingdom. It also commits both countries to take more flexible approach to verify identity and nationality of individuals to speed up returns process.
MoU on criminal records exchange:  It will help in sharing of criminal records, fingerprints and intelligence between Indian and British law enforcement bodies. It will help police forces from both countries to strengthen their law enforcement and protect the public from known criminals including sex offenders. It will also allow courts of both countries to get access to more information to support tougher sentencing decisions.