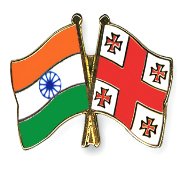 India and Georgia have singed a Joint Statement on the launching of the Joint Feasibility Study on the Free Trade Agreement between both countries.
The statement was signed by Union Commerce & Industry Minister Nirmala Sitharaman and Georgia’s Minister of Economy and Sustainable Development Giorgi Gakharia.

India is having positive trade balance with Georgia. In 2015-2016 the total exports from India to Georgia was $82.57 million and import from Georgia was $24.47 million. The Joint Feasibility Study will further contribute to the mutually beneficial cooperation of the partners and bring it to a new level.
Georgia: It is a country in the Caucasus region of Eurasia. It is located at the crossroads of Western Asia and Eastern Europe and is bounded by the Black Sea to the west, Russia to the north, Turkey to the south and Armenia and Azerbaijan to the southeast. Tbilisi is its capital and largest city.