Htin Kyaw sworn in as first elected President of Myanmar 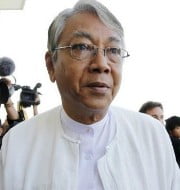 Htin Kyaw (69) sworn in as the first elected civilian (non-military) President of Myanmar after 53 years of military rule. Myanmar’s Army was in power since 1962 coup.
He belongs to National League for Democracy (NLD) Party and succeeds Thein Sein, who had stepped down after end of five years of army-backed rule.
Apart from him, Military backed Myint Swe and NLD member Henry Van Thio were sworn in as first vice-president and second vice-president of the country along 18 Cabinet ministers.
Nobel Peace laureate Aung San Suu Kyi who is the leader of NLD party that has majority in the Parliament was sworn in as foreign affairs Minister. She also is Minister of President’s office, education, and energy and electric power.
Htin Kyaw is a close aide and adviser of Nobel Peace laureate Aung San Suu Kyi. He was as the first civilian President of the country by the Myanmar’s Parliament on 15 March 2016.
Even though NLD is having majority in Parliament, Aung San Suu Kyi was not able to become President as the military drafted 2008 constitution of country bars citizen having children of another country nationality. Her children hold British passports.