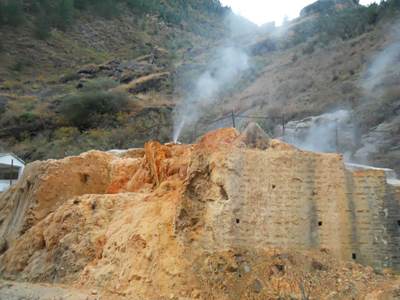 According to a report published by Wadia Institute of Himalayan Geology, an autonomous Institute under the Department of Sciences and Technology, Government of India, has claimed that the Himalayan Geothermal springs contribute to a huge amount of carbon-di-oxide to the atmosphere.

What does the Detailed Report Say?

As per the report, the organization has investigated the gas emissions from the springs that cover around 10000 square km in the Garhwal Region in Uttarakhand and it has been observed that a significant amount of carbon-di-oxide is emitted from these springs. The amount is around 7.2 × 106 moles/year. This is originated from metamorphic de-carbonation of carbonate rocks present deep in the Himalayan core along with magmatism and oxidation of graphite.

The scientist from the organization carried out detailed chemical and stable isotope analysis of water samples collected from around 20 geothermal springs from major fault zones of Garhwal Himalaya. The isotopic measurements along with all the major ions were also analyzed for all the samples.