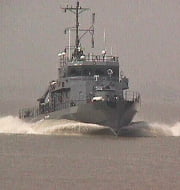 Indian Navy has launched INS Tarasa, the fourth and last ship in the series of the Water Jet Fast Attack Craft (WJFAC).
It is being built by Kolkata (West Bengal) based Garden Reach Shipbuilders & Engineers Ltd (GRSE), for the Indian Navy. The WJFACs are ideally suited and used for interception of fast-moving surface craft.