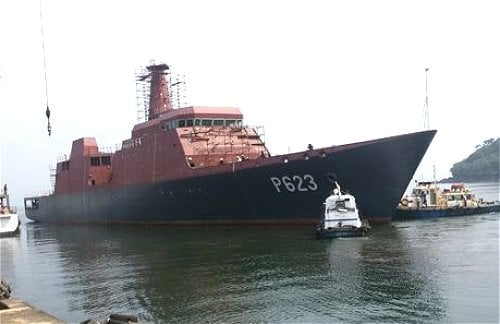 The vessel is the largest and most advanced ship in Sri Lankan Navy fleet. This is the fourth Offshore Patrol Vessel (OPV) delivered by GSL in current financial year.
The keel of the vessel was laid in May 2015 and was launched in May 2017. It was completed and delivered vessel 25 Days ahead of contractual schedule. With this, GSL has succeeded in reducing build period of 2,500 Tonnes OPV to nearly three years from over five years taken till about three years ago.

The SLOPV Project for building two large size ships is one of the most significant defence cooperation between India and Sri Lanka. The project is one of the largest export contracts being executed by India’s state-owned shipbuilder GSL for any friendly country. SLNS Sayurala was the first AOPV of the series delivered by GSL in July 2017 ahead of contractual schedule.
Sri Lanka Navy’s Maritime Strategy envisages 20 naval ships including OPVs by year 2025. According to plan, Sri Lankan Navy will purchase two more OPVs, two fast missile vessels, two frigates, and two corvettes. With the acquisition of two AOPV from India, Sri Lankan Navy now has five vessels, of similar type, namely SLNS Sayura (Sukanya class P 620), SLNS Samudura (formerly of US Coast Guard P 621), SLNS Sagara (Vikram class P622) and SLNS Sayurala (P 623). Four other naval ships including two fast missile vessels and two fast patrol boats received from Australia are also in service with Sri Lankan Navy.

GSL is one of India’s best shipyards and designated mini-Ratna by the Union Government. It is located in Vasco da Gama, Goa. It was established in 1957, originally by colonial government of Portuguese in India, as the “Estaleiros Navais de Goa” to build barges to be used in Goa’s growing mining industry. In the wake of Portugal’s defeat and unconditional surrender to India following 1961 Indian annexation of Goa, GSL was requisitioned to manufacture warships for Indian Navy and Indian Coast Guard (ICG).