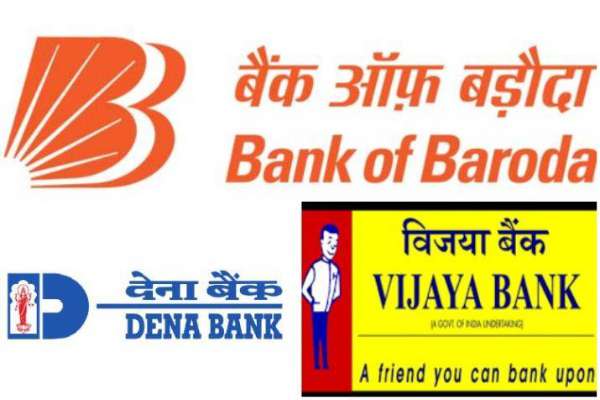 Union Finance Ministry announced proposal for amalgamation of three public sector banks- Bank of Baroda, Dena Bank and Vijaya Bank. The combined entity after consolidation will create India’s third largest bank. Post this merger, number of PSU banks will come down to 19 from 21, accounting for more than two-thirds of banking assets in the country.

This was second major banking sector consolidation in recent year after merger of five associate banks of State Bank of India with itself. The amalgamation will be through share swap which will be part of scheme of merger. The proposal will now need approval of boards of these individual banks. This amalgamation will particularly help Dena Bank, the weakest of the three which is currently under Reserve Bank of India’s Prompt Corrective Action (PCA) framework and has been barred from extending fresh loans.

The merger of three PSBs will help create strong globally competitive bank with economies of scale. It will enable realisation of synergies for networks, low-cost deposits and subsidiaries of these three PSBs. The merger will result in substantial rise in customer base, operational efficiency, market reach and wider bouquet of products and services. The merged entity will have better financial strength and will place all three banks on Finacle Core Banking Solution (CBS), a platform that helps banks enhance agility and efficiency of operations, while significantly improving customer experience across channels. The merger of these three banks will have no adverse impact on employees and customers of individual banks.

The merger of these three state-owned banks was part of government’s agenda of consolidation of PSBs. It was proposed by Alternative Mechanism comprising Chairperson Arun Jaitley. Under it, government did not want merger of weak banks and has therefore suggested idea of amalgamating one weak bank and two strong banks, in order to create entity which is able to increase banking operations. This also indicates approach that government may deploy in future consolidation.