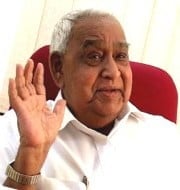 Former Chief Minister of Goa Dr Wilfred de Souza passed away in Panaji. He was 88.
He had served as Goa CM for three times and was known for his combative brand of politics. He was key politician to bring Congress to power in Goa in 1980.