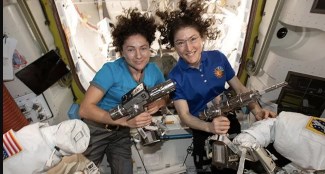 NASA astronauts Jessica Meir and Christina Koch made history when they ventured outside International Space Station (ISS) for first ever all women spacewalk. It was the first time in more than half a century of space exploration that two women astronauts walked in space together.

Christina Koch had already carried out four spacewalks but it was the first such mission for Jessica Meir, who became the 15th woman to walk in space.

They spent seven hours outside ISS replacing a failed power control unit and made their way to a location called Port 6 truss structure to replace battery charge-discharge unit (BCDU).

NASA was hoping to have an all-female spacewalk in March 2019 but it was then canceled after astronaut Anne McClain discovered that spacesuit she was to wear did not fit properly, due to which astronaut Nick Hague went in her place.