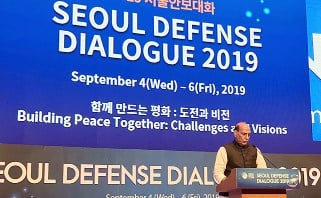 During the address Defence Minister highlighted that among the numerous security challenges that world is facing, gravest is that of terrorism as no country in world is safe from terrorism.

He called for collective international action to check perpetrators of terrorism. He also advocated strong measures against those who support and finance terrorism and provide sanctuary to terrorists.

India has been actively pursuing counter terrorism cooperation bilaterally, regionally and globally through United Nations and other fora.

With world politics today being in a state of flux, it has aggravated global and regional challenges to international peace and security. Also, new and emerging technologies have impacted regional and global security environment.

India’s neighboring region is confronted with numerous traditional and non-traditional security threats such as transnational crimes, terrorism, conflicts, maritime threats, proliferation as well as the challenges of sustainable development.

India’s ‘neighbourhood first policy’: As India’s foreign policy has always prioritized on good relations with its neighbours, therefore India also supports for peace and stability in Korean Peninsula and its denuclearisation through dialogue and diplomacy.

It was held in Seoul, capital of South Korea.

Defense officials and experts from around 50 countries and 5 international organizations attended the Dialogue, however, U.S. representative did not attend.

Background: Seoul Defense Dialogue was launched in 2012 as a vice ministerial level multilateral security consultation regime for talks on Asia-Pacific cooperation and peace on Korean Peninsula.