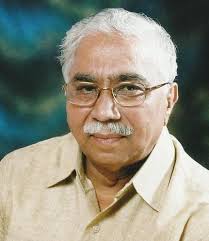 Jnanpith recipient and Kannada litetrateur Chandrashekhar Kambar (81) was elected as President of the Sahitya Akademi. He will serve as president of the Akademi for a period of five years. Hindi poet Madhav Kaushik was elected as vice president of the Sahitya Akademi.
Kambar won election for Akademi’s top post by beating his rivals Marathi writer Bhalchandra V Nemade and Odia writer Pratibha Ray by securing as many as 56 votes out of 89 in all. Kambar is the third Kannada writer to head country’s national academy of letters after Vinayaka Krishna Gokak (1983) and U R Ananthamurthy (1993).

He was born on    2 January 1937 in Ghodageri, a village in Belagavi. Kambar did his PhD thesis on ‘Uttara Karnatakada Janapad Rangbhumi’ from Karnataka University, Dharwad, after his post-graduation. He also taught in Bangalore University for over two decades.
He was first vice chancellor of Hammpi Kannada University and also has served as chairman of National School of Drama Society, New Delhi (1996 to 2000) and as president of Karnataka Nataka Academy (1980 to 1983).
He has to his credit 25 plays, 5 novels, 11 anthologies of poems, 16 research works and several scholarly write-ups on folk theatre, literature and education.  Some of his popular plays include Jokumaraswam, Jayasidnayaka, Kadu Kudure, Nayi Kathe, Mahamayi, Harakeya Kuri and others.
He is recipient of various awards including  Jnanpith Award (2010), Sahitya Akademi Award, Padma Shri, Kabir Samman, Kalidas Samman and Pampa Award.

It is India’s National Academy of Letters. It is an organisation dedicated to promotion of literature in Indian languages of India. It was founded in March 1954. It is headquartered in Rabindra Bhavan in Delhi. It is the central institution for literary dialogue, publication and promotion in the country. It is only institution that undertakes literary activities in 24 Indian languages, including English.
It organises national and regional workshops and seminars; provides research and travel grants to authors; publishes books and journals, including the Encyclopaedia of Indian Literature. It also gives 24 awards annually to literary works in the languages it has recognized.