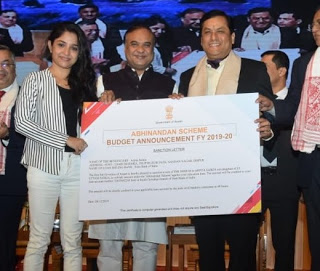 For deserving students in the state, the Assam government has launched a scheme named- Abhinandan that will facilitate them in higher education. The Chief Minister of Assam, Sarbananda Sonowal handed over the sanction letters to the students in a program organized at the Srimanta Sankardev Kalashetra, located in the capital city of Assam, Guwahati on Thursday, 26 December 2019. Under the scheme, the beneficiary students are provided with a one-time subsidy of up to a maximum of Rs 50,000 against the education loan they have applied for higher education. For being eligible for the scheme, a student who has applied for an educational loan of Rs 1 lakh or above can enroll themselves in the Abhinandan scheme. For students who have applied for a educational loan from any respective banks on or after 1st April 2019 have to wait until they repay 25% of the amount sanctioned under the loan for applying under the scheme, while all students those have educational loans sanctioned on or before 31st March 2019 can apply under the scheme. In the first batch of the scheme, 1500 students will be benefited under the scheme, while the government aims to double the figure to 3000 students in the second batch. The Assam government through the loan subsidy scheme will aim to urge more students to pursue higher education. The Chief Minister while addressing the gathering at the ceremony urged the students to put Assam among the front ranking states in the country with their knowledge, service to the society and hard work.