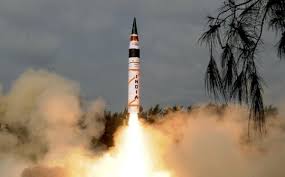 India successfully test fired its indigenously developed Agni- 5 missile on 3rd June. The missile was launched from Dr Abdul Kalam Island off the Odisha coast. Agni missile is a surface to surface missile and is launched with the help of mobile launcher of the Integrated Test Range at Dr Abdul Kalam Island formerly known as Wheeler Island. This is the 6th test fire of the state-of-the-art Agni 5 missile.
The trial was a great success. The missile hit its target with great accuracy after covering its full distance. The entire flight was monitored by radars, tracking instruments and observation stations.

Agni 5 ballistic missile is the brainchild of Defence Research and Development Organisation (DRDO). It is the most advanced in the series.