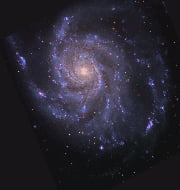 Astronomers using NASA’s Hubble Space Telescope have discovered that the universe is expanding 5 percent to 9 percent faster than expected.
Discovery in this regard was made by an international team of researchers of the Space Telescope Science Institute and The Johns Hopkins University.
How it was discovered?

Cepheid stars: These stars pulsate at rates that correspond to their true brightness. This can be compared with their apparent brightness as seen from Earth in order to accurately determine their distance.
Type Ia supernovae: It is another commonly used cosmic yardstick. They are exploding stars that flare with the same brightness and are brilliant enough to be seen from relatively longer distances.
Key findings