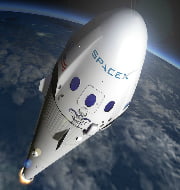 American aeronautical company SpaceX launched several experiments into the space on December 5th on board its Dragon Capsule. The SpaceX Dragon is a reusable spacecraft used for delivering cargo. This is the 19th supply run made by the company for NASA and it was launched from Cape Canaveral. It delivered the following to the International Space Station: