September 16: International Day for Prevention of the Ozone Layer 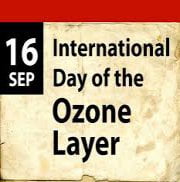 The International Day for the preservation of the ozone layer which is also known as the World Ozone day is being observed today on September 16, 2020.  Theme for 2020 edition is- “Ozone for life: 35 years of ozone layer protection”.

The agreement was signed in 2019 and it works with an objective to reduce the uses of hydro-fluorocarbons by 80% to 85% by 2040 in order to reduce the greenhouse gases.

Ozone with the chemical formula O3 is a highly reactive form of oxygen. It can be both natural and man-made and it is found in the upper layer of the atmosphere. IT makes a thin layer over the Earth’s atmosphere called as the ozone layer which protects from the harmful radiations of the Sun. It is pale blue in colour and having a pungent smell. Most of the ozone concentration (around 90%) is found in stratosphere between the height of 10 km to 40 km. The remaining 10% of it is found near the earth’s surface which is called as surface ozone.

This is also known as Tropospheric or ground level ozone. It is man-made and it happens when pollutants from cars, power plants, industrial boilers, refineries and chemical plants chemically react in the presence of sunlight. The ozone is not directly emitted into the air.  It is created by chemical reactions of the oxides of nitrogen (NOx) and volatile organic compounds (VOC).