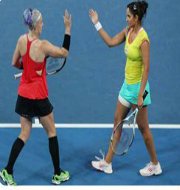 India’s Sania Mirza along with her American partner Bethanie Mattek-Sands has won doubles title at the Sydney International Tennis Tournament 2015.
Indo-American in the finals defeated top-seeded Americans Abigail Spears and Raquel Kops-Jones by score of 6-3, 6-3.
It should be noted that it was fifth WTA title won by Sania and Bethanie together as partner. While, this win is Sania’s first title of the season and 23rd of her career.

It is one of the oldest professional tennis tournaments in the world, dating to 1885.
It is currently noted as an ATP 250 point event on the men’s tour and a WTA Premier event on the women’s tour.
It is played annually at the Sydney Olympic Park Tennis Centre in Homebush, New South Wales, Australia.