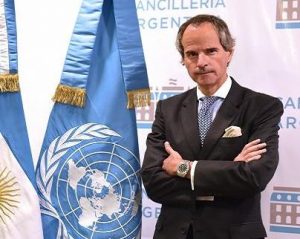 Rafael Mariano Grossi of Argentina has been appointed as the new Director General of International Atomic Energy Agency (IAEA), a United Nations’ nuclear watchdog. The Argentine diplomat will succeed late Yukiya Amano as the new chief of IAEA.

The 58-year-old Gossi will be appointed for a term of four years and will assume office no later than 1 January 2020. He will be the sixth head of IAEA since it was founded more than six decades ago in 1957.

He will preside over the 2020 Review Conference of the Parties to the Treaty on the Non-Proliferation of Nuclear Weapons at the UN headquarter in New York from April to May 2020.

It is an international organization that promotes peaceful use of nuclear energy as well as inhibits the use of nuclear energy for any military purpose including nuclear weapons. It was established on 29 July 1957 with its headquarters in Vienna, Austria. It was created as an autonomous organisation through its own international treaty, the IAEA Statute. Even though IAEA is established independently of United Nations, it reports to both United Nations General Assembly (UNGA) and United Nations Security Council (UNSC). IAEA General Conference consists of representatives of all 171 Member States.

He is a nuclear and diplomatic veteran from Buenos Aires in Argentina. He chaired expert panels on UN Register of Conventional Arms in 1997 and 2000. He was the chief political coordinator at Argentine Foreign Ministry from 2007-10, before being named an ambassador to Belgium, while doubling as Argentine envoy to United Nations office in Geneva. He served as a diplomat for a decade before holding several senior positions within UN. He has been Argentina’s ambassador to Slovakia, Slovenia and Austria and permanent representative to international organisations in Vienna since 2013.

From 2002 to 2007, he headed the IAEA headquarters in Vienna (Austrian capital) and UN’s Organisation for Prohibition of Chemical Weapons (OPCW) in The Hague, Netherlands. In 2010, IAEA had appointed Grossi as its assistant director-general for a stint of three years. He also headed Nuclear Suppliers Group (NSG), which is a multinational export control regime, the Convention on Nuclear Security and was deputy to the head of OPCW between 2014 and 2016.