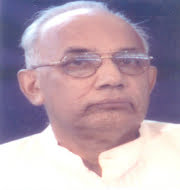 Haryana governor Prof Kaptan Singh Solanki took over the additional charge of Governor of Punjab. He will be 34th governor of Punjab.
He was administered the oath of office by Chief Justice of Punjab and Haryana High Court Shiavax Jal Vazifdar at Punjab Raj Bhavan in Chandigarh.
He was given the additional charge of Punjab after the tenure of then governor Shivraj V Patil  retired on 21 January 2015 after his tenure came to an end.
Constitutional provisions of Governor