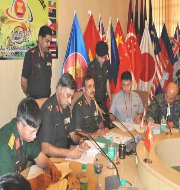 The first field training military exercise MILEX-18, as part of the Bay of Bengal initiative for multi-sectoral technical and economic cooperation (BIMSTEC) commenced at Foreign Training Node at Aundh in Pune, Maharashtra. All member BIMSTEC countries, except Thailand and Nepal will take active part in this exercise. Thailand and Nepal will only be sending group of observers.

The theme of the exercise is counter-terrorism in semi-urban terrain. Its main aim is to promote strategic alignment among member-states and to share best practices in the area of counter-terrorism. The exercise will include training in operations like search-and-cordon operations, search and destroy and handling and neutralisation of improvised explosive devices (IEDs) among other things. Each participating member country will be represented by platoon sized contingents including around 30 soldiers (including five officers, 25 Junior Commissioned Officers (JCOs) and personnel of other ranks). As part of this exercise, conclave of Army chiefs of all seven member-states is also being planned. In it, army chiefs will debate challenge of terrorism and transnational crime, which is major concern among all states and discuss ways to promote collective cooperation.

Through this exercise India is trying to achieve in cooperative defense diplomacy. It is also looking forward to initiate process of sharing counter-terrorism strategies among armies of member nations in the region. India also wants to start a dialogue, sharing of procedures, thoughts, processes and certainly strategies to deal with terrorism collectively in region.
Note: BIMSTEC countries had held disaster management exercise in 2017 in New Delhi, but this will be first military exercise of the grouping.

It is regional group of seven countries in South Asia and South East Asia lying in littoral and adjacent areas of Bay of Bengal constituting contiguous regional unity. It was established on 6 June 1997 through Bangkok Declaration. It is headquartered in Dhaka, Bangladesh.
Its member countries are India, Nepal, Bangladesh, Bhutan, Sri Lanka from South Asia and Myanmar, Thailand from South East Asia. They are collectively home to around 1.5 billion people which constitute around 22% of global population.
BIMSTEC’s main objective is to promote technological and economic cooperation among south Asian and south-east Asian countries along coast of the Bay of Bengal. The grouping is sector-driven cooperative organization, started in 2006 with six sector including trade, technology, energy, transport, tourism and fisheries. In 2008, it was expanded to embrace eight more sectors including agriculture, public health, poverty alleviation, counter-terrorism, environment, culture, people to people contact and climate change.