Measurement of Inflation in India

The Wholesale Price Index (WPI) was main index for measurement of inflation in India till April 2014 when RBI adopted new Consumer Price Index (CPI) (combined) as the key measure of inflation.

Wholesale Price Index (WPI) is computed by the Office of the Economic Adviser in Ministry of commerce & Industry, Government of India. It was earlier released on weekly basis for Primary Articles and Fuel Group. However, since 2012, this practice has been discontinued. Currently, WPI is released monthly.

Salient notes on WPI are as follows:

Current WPI Base year is 2004-05=100. Its worth note that the base year for CPI is 2012 currently. This is one reason for increasing difference between CPI and WPI in recent times.

There are total 676 items in WPI and inflation is computed taking 5482 Price quotations. These items are divided into three broad categories viz. (1) Primary Articles (2) Fuel & power and (3) Manufactured Products, as shown in below table: 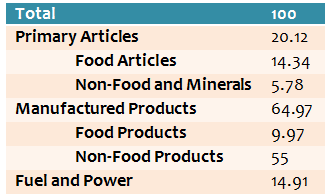 For your examinations, you may note down the below observations:

We note here that WPI does not take into consideration the retail prices or prices of the services.

In India, RBI uses CPI(combined) released by CSO for inflation purpose. Important notes on this index are as follows

The number of items in CPI basket include 448 in rural and 460 in urban. Thus, it makes it clear that CPI basket is broader than WPI basket. The items in CPI are divided into 6 main groups as follows:

The most comprehensive measure is GDP deflator which is measured as ratio of GDP (Gross Domestic Product) at current prices to GDP at constant prices. Since it encompasses the entire spectrum of economic activities including services, the scope and coverage of national income deflator is wider than any other measure. This data is released by the Central Statistical Organisation (CSO) but is not used as it comes quarterly and with a 2 month lag.