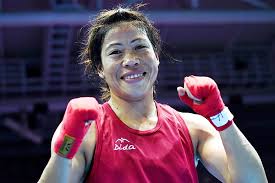 The Indian Boxer, Mary Kom, was appointed as the chairperson of the International Boxing Association (AIBA) champions and veterans committee on March 3, 2021.

AIBA President Umar Kremlev stated that he is confident that Mary Kom will make significant contribution towards the success of this committee with her vast knowledge and experience.

About AIBA champions and veterans committee

This committee was established in December 2020. It comprises of the most respected boxing veterans and champions from across the world who have achieved some significant goals and are ready to share their experience.

Mary Kom is an Indian boxer. She is also a current Member of the Indian Parliament. The boxer was nominated as the member of upper house of the Parliament that is Rajya Sabha on April 25, 2016 by President Ram Nath Kovind.  She has created many histories for India in field of Boxing. She is the only female boxer who have become the “World Boxing Champion” for a record of six times. She is also tagged as the only boxer who have won eight World Championship medals. Further, Mary is the only female boxer who have won a medal in each of first seven World Championships. She is remembered as the only Indian female boxer who qualified for 2012 summer Olympics, in which she won a bronze medal in flyweight 51 kg category.