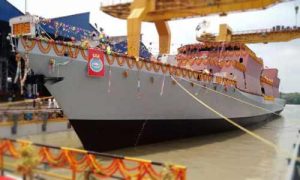 Kolkata-based India’s state-owned leading shipyard enterprise, Garden Reach Shipbuilders and Engineers Ltd (GRSE) is to deliver the anti-submarine stealth warship, INS Kavaratti to the Indian Navy soon, as per the recent announcement.  Chairman and Managing Director of GRSE informed that the ship has completed the trails successfully.

Kavaratti is the last of the four Anti-Submarine Warfare (ASW) stealth corvettes built by the GRSE for the Indian Navy under Kamorta-class corvettes or Project 28. The first three: Kamorta (commissioned in 2014), Kadmatt (2016) and Kiltan (2017) are being named after islands in the Lakshadweep archipelago. The new Kavaratti warship has 90 percent indigenous components and is expected to require lower maintenance. With all the trials being completed, the ship is to be delivered by the month-end. The initial cost of the four corvettes was estimated to be Rs 2700 at the time it was sanctioned back in 2003 by the Central Government, but the final cost of the project ended with Rs 7000 crore.