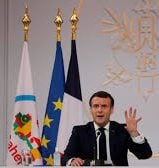 The lower house of the French parliament has approved the Ant-Radicalism bill in a bid to fight the Islamic radicalism.

The bill was passed in the backdrop of fighting extremism in the country. This fight against extremism gained momentum after a teacher was beheaded in October 2020.

How Muslims are reacting?

Many of the French Muslims stated that this draft law will limit the religious freedom. They are of the view that this bill unfairly targets them since there are already enough laws to fight the terrorist violence in the country. Further, the critiques are of the view that this bill was passed keeping in view the Presidential election of 2021 in order to win the support from conservative and far-right voters.

It was a historical political movement of the 18th and 19th centuries in the domain of liberalism. This movement is a precursor to the social liberalism. The movement seeks to transform or replace the fundamental principles of society through the social change, revolution, structural change or radical reform.