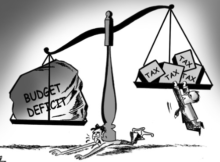 The increase in the fiscal deficit has been attributed to lower revenue collections.