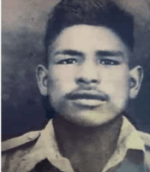 Rifleman Jaswant Singh Rawat was honoured by building a memorial at the post where he fought the Chinese People’s Liberation Army and it was named as “Jaswant Garh”. He is also bestowed with another honour as per which he continues to serve even after death. He has been awarded promotions as if he is still serving.