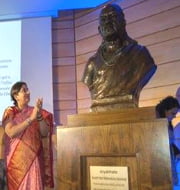 A bronze bust of ancient Indian mathematician and astronomer Aryabhatta was unveiled at the UNESCO Headquarters in Paris, France.
It was unveiled by Union Human Resource and Development Minister Smriti Irani. She was in the French capital to attend the International Conference on Zero.
The bust has been sculpted by renowned Indian sculptor Ram Sutar who was awarded the Padma Bhushan, India’s third highest civilian awards for his contribution to the world of art.