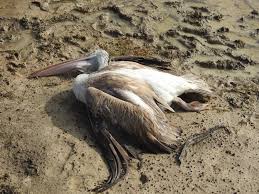 How did the birds die?

The scientist believe that the birds would have died of viral or bacterial infections. Also, they believe that it might be a flu as the birds are dying in large numbers.

What steps have been taken to find out the cause of death?

The forest officials have collected more than15 samples from different locations. These samples have been sent to Indian veterinary Research Institute in Uttar Pradesh Bareilly, high security animal disease laboratory is situated in Bhopal and to the northern regional disease Diagnostic laboratory in Jalandhar to determine the cause of death.

Which birds died in pong dam?

Around 95% of birds that were found dead in the Pong Dam Sanctuary were the Bar Headed Geese that migrate from Siberia and Mongolia.

Around 1.15 to 1.2 lakh birds migrate to Pong Dam Bird Sanctuary during winters every year. They nest up to four months in the sanctuary.

The Pong Dam is also called the Beas dam. It is an artificial embankment Dam constructed across the Beas river in Himachal Pradesh. The Reservoir created by the dam is called Maharana Pratap Sagar and is a renowned Bird Sanctuary. The dam was constructed for hydroelectric power generation and irrigation.

The Maharana Pratap Sagar is located in the wetland zone of Shivalik Hills.

Is Maharana Pratap Sagar Reservoir one of the International wetland sites of Ramsar convention?

What are the other recent mass wildlife deaths in India?