The Vedas are said to have been passed on from one generation to the next through verbal transmission and are, therefore, also known as Shruti (to hear) or revelation. The term Vedic literature means the four Vedas in their Samhita and the allied literature based on or derived from the Vedas. We classify the Vedic literature into the following categories:

The Vedic literature is broadly divided into two categories viz. Shruti and Smriti. Shruti is “that which has been heard” and is canonical, consisting of revelation and unquestionable truth, and is considered eternal. Shruti describes the sacred texts comprising the central canon of Hinduism viz. Vedas, Brahmanas, Aranyakas, & Upanishads.

Smiriti literally means “that which is remembered, supplementary and may change over time”. It is authoritative only to the extent that it conforms to the bedrock of Shruti and it is entire body of the post Vedic Classical Sanskrit literature. It comprises Vedanga, Shad darsana, Puranas, Itihasa, Upveda, Tantras, Agamas, Upangas.

Rig-Veda is known as the oldest religious text in the world. It is also known as “First testament” of mankind. It was composed around 1700 BC. Last hymns were composed between 1500-1200 BC. It’s a collection of hymns by a number of priest families.  It is organized in 10 books which are called Mandalas.  The first and 10th Mandalas are the youngest and the longest books.  Second to Seventh Mandalas are oldest parts of Rig-Veda but the shortest books. 8th and 9th books are of mixed ages.

Rig-Veda is neither a historical nor a heroic poem but is mainly a collection of hymns by a number of priestly families. These were recited at the time of sacrificial rites and other rituals with utmost devotion. The Rig-Veda contains 1017 (1028, including 11 hymns of the Valakhilya recession) hymns (Sukta) and is divided into ten mandalas. The first and the tenth Mandalas  are said to have been  added later as their  language  differs slightly  from the other  eight Mandalas.

“Yajus” means “sacrificial formula” and Yajurveda is the book of sacrificial prayers. It contains the rituals of the Yajnas.  It is estimated to have been composed between 1,400 and 1000 BC. It prescribes the rituals for performing different sacrifices. It was the manual of the Adhvaryus.

Adhvarus were the people prepared the ground and the altar offered the sacrificial victims and poured out the libations.

Distinction between Black and White Yajurveda

World’s oldest prose literature of the Indo-Europeans is contained in Yajurveda. There are two distant forms of this Veda. In the oldest, the instructions about rituals are mingled with the verses from the Rig-Veda. The chief recession of this is that taught by a school of teachers called the Taitttiriyans. This was called Black Yajurveda.

At a later date other scholars called the Vajasaneyins separated the explanatory matter from the verses to be recited and hence were called white (Shukla) Yajur-Veda, the other being called the black (Krishna) Yajur-Veda.

This implies that the Krishna Yajurveda includes the Brahmana prose discussions within the Samhita (i.e. it has no Brahman) while the Shukla Yajurveda has separately a Brahmana text, the Shatapatha Brahmana.

“Saman” means melody and it contains the Rhythmic compilation of Hymns of Rigveda. It ranks next in sanctity and liturgical importance to the Rigveda. It contains 1549 hymns which are meant to be sung at the soma sacrifice by a special class of Brahmans called “Udgatris”. It has three shakhas or recensions:

Atharva-Veda is entirely different from the other three Vedas and is chronologtically the last of the four. It is important and interesting as it  describes  the popular  beliefs  and superstitions  of the humble folk. Atharvaveda contains the magic spells, incorporates much of early traditions of healing and magic that are paralleled in other Indo-European literatures.

For a very long time it was not included  in the category  of the Vedas.‘ Atharvan’ was a legendary Rishi and is considered to have sung the Atharvaveda. He is also said to have first instituted the fire-sacrifice or yagna. Atharvaveda was mainly composed by two groups of rishis known as the Atharvanas and the Angirasa, hence its oldest name is Ātharvāṅgirasa.

The Brahmanas are the prose texts which explain the hymns in the Vedas, give explanation and applications and related stories of their origin. They also have some stories related to the certain persons related to the Vedic Text.

The following diagram shows the Brahmans of Vedas.

The Aranyakas were written in Forests and are concluding parts of the Brahmans.

Aranyakas don’t lay much emphasis on rites, ritual and sacrifices but have philosophy and mysticism. This is because aranyakas were written mainly for the hermits and students living in the jungles. They lay emphasis not on sacrifices but on meditation. They are in fact, opposed to sacrifices and many of the early rituals. Their stress is on moral values. They form a bridge between way of work (karma marga) which was the sole concern of the Brahmanas and the way of knowledge (gyan marga) which the Upanishads advocated. In other words, Aranyakas are focussed on moral science and philosophy. They also provide the details of the Rishis who lived in jungles.

“Upa” means nearby and “sada” means sit. So Upanishads contain the knowledge imparted by the gurus to their disciples.

Eventually the word began to be used for the secret knowledge imparted by the guru to his selected pupils. A number of treatises were prepared, first orally and then in writing, and were called by the same name of Upanishad. Today Upanishads specify philosophical knowledge and spiritual learning. 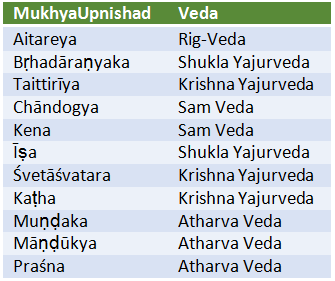 Why Upanishads are called Vedanta?

The Oldest Upanishads are Brhadaranyaka and Chandogya Upanishads which date as back as the first millennium BC. Latest were composed in the medieval and early modern period. The latest Upnishad is Muktikā Upnishad and was recorded by Dara Shikoh. It dates to 1656. Dara Shikoh was son of Mughal emperor Shah Jahan and is known to have translated fifty Upanishads into Persian. There are 108 Upanishads.  11 are predominant and they are called “Mukhya Upanishads”.

Created by Maharishi Valmiki. Consists of 24,000 verses in seven books (Kandas) and 500 sargas) and tells the story of Rama. Verses in the Ramayana are written in a 32-syllable meter called anustubh and ranges in 50000 lines in total.  Valmiki is also regarded as India’s First Poet. Father Kamil Bulke, author of Ramakatha, has identified over 300 variants of Ramayana. It inspired Tulsikrita Ramayan “Ram Charit Manas” in 1576 by Tulsi Das.

The Mahabharta is attributed to Maharishi Vyas and the tale known as Bharta is a shorter version of 24,000 verses, while the Mahabharta contains 1 Lakh verses and 1.8 million words which makes it 10 times longer than “Iliad and Odyssey combined” and 4 times of Ramayana.

They are late descriptions of ancient legends and consist of history of the universe from creation to destruction, genealogies of kings, heroes, sages, and demigods, and descriptions of Hindu cosmology, philosophy, and geography. They are colored with superstitions and also represent a corrupt form of Hindu Philosophy. There are 18 major Puranas.

Upaveda means applied knowledge and are traditional literatures which contain the subjects of certain technical works. They are as follows: