Soil contains mineral particles, decayed organic material, soil water, soil atmosphere, and living organisms, which exist in a complicated and dynamic relationship with one another. Soil is a dynamic natural body made up of the materials covering the earth’s surface in which plants grow. It is composed of both mineral and organic matter.

The above mentioned factors do not work on soil independently or in isolation, but in close association with each other, leading to a whole network of inter-relationships of quite a complex nature. The material of the soil or the parent material is derived from the rocks ex-posed on the surface. The relief and slope along with the work of various materials. Soils weathering determine conditions for the disintegration of the rock materials. Soils may be transported by the running water, wind or other agents of the rock materials. Soils remain in the original position. A soil is made up of four elements: inorganic or mineral fraction (derived from the parent material), organic material, air and water. The abundance of each component and its importance in the functioning of the soil system vary from horizon to horizon and from one soil to another.

The end-product of the breakdown of dead organic material is known as Humus. Humus is a structure-less, dark-brown or black jelly found beneath the soil surface. In uncultivated land, the humus is derived from the natural decay of previous generations of plants, while in the ploughed and cultivated land it is supplied as some kind of manure. The humus of ordinary soil is black, and is thus responsible for making the soil darker than the subsoil. It plays an important but very complicated part in maintaining the fertility of soil.  The amount of humus in different soils varies considerably; some, like the peat soil, consist largely of slightly decomposed organic matter which has not yet become humus.

A soil is generally characterized by the size of its particles. A clayey soil may thus be described as fine, a sandy soil as coarse, while a silly soil is intermediate. If one handles a moist soil sample of each of these he feels gritty, sticky and silky, respectively.  The standard unit for the measurement of soil particles is the millimeter, but a smaller unit is the micron (1 micron= 0.001 mm), which is applicable, for instance, to the measurement of soil colloids.

Sandy soil is a light soil that consists mainly of sand, i.e., grains of quartz with considerable air spaces between them. The sand may either be ‘coarse’ where the particles are between 0.2 and 2 mm in diameter, or ‘fine’ where the grains between 0.05 and 0.2 mm are just visible to the naked eye.  These light soils allow water to drain through rapidly, taking soluble plant foods with it. Sandy Soils are known as ‘hungry’ soils, which not only need constant manuring but may dry out completely during a period of drought so that shallow-rooted crops fail and pastures ‘burn’. They are good for horticulture (vegetables and fruits), legumes (such as moth and pulses), ground nut and bajra.

Clayey soil is an exceptionally fine grained soil, very retentive of moisture. It often becomes plastic when mixed with water. The individual grains of clayey soil are 0.002 mm in diameter. These particles consist mainly of hydrated aluminium silicates.

Clay contains little air and can hold more water, so forming a sticky mass, but when it dries out completely, it forms a hard, concrete like surface, seamed with numerous cracks. Sometimes, a compacted solid layer of clay in the subsoil is formed, which is known as claypan, and is often hard and difficult to dig or plough. Clayey soils are often rich in plant food and give much better yields than that of sandy soils.  They are devoted to rice, perennial grasses other crops such as clover. Efficient drainage methods, modern machinery and careful liming enable clayey soils to grow roots, green crops and cereals.

Silty soil is finer than sand but coarser than clay. Its particles are assumed to have a diameter between 0.02 and 0.002 mm. These soils are rich in humus contents and are devoted to numerous cereal and non-cereal crops.

It is highly fertile soil consisting mainly of a mixture of sand and day, together with silt and humus. It has the good qualities of both sand and clay, but not their bad qualities. It comprises an almost equal mix of sand and silt with less than 30 per cent clay. It can retain some moisture and plant food even under the adverse weather and climatic conditions. It is well· aerated and drained, and can be readily worked.  It is generally devoted to wheat, barley, legumes, sugarcane, sugar beet, maize, millets, rice, grasses, vegetables and orchards.

Soil pH is a measure of the acidity or basicity in soils.  As we know, the pH below 7 is acidic and above 7 is basic. Soil pH is considered a master variable in soils as it controls many chemical processes that take place. It specifically affects plant nutrient availability by controlling the chemical forms of the nutrient. The optimum pH range for most plants is between 6 and 7.5, however many plants have adapted to thrive at pH values outside this range.

The first thing we should note that in cool and moist areas, percolating groundwater leaches out the soluble bases (such as calcium). As a result, the soils gradually become lime-deficient which increases the acidity of the soil.

Both the highly acidic and alkaline soils are injurious to crops.  If the soil becomes unduly acidic, the farmers apply lime in various forms to meet the requirements of the soil. In practice, a pH value between 6 and 6.5, i.e., very slightly acidic, is desired. Lime not only helps to neutralize the excess adds and so ‘sweeten’ the soil, but it also encourages bacteria and helps to improve the physical , texture of heavy soils. High soil acidity is typical of cold, humid climates. In arid climates, soils are typically alkaline.

How to Increase soil pH?

Acidity can be corrected by the application of lime, a compound of calcium, carbon and oxygen (CaCO3), which removes add ions and replaces them with the base calcium.

How to Decrease soil pH?

The problem of Alkaline Soils

Alkali or alkaline soils are the soils with high pH (> 9). The fist visible impact of Alkaline soil is that it has a poor soil structure and a low infiltration capacity. The Alkali soil is generally having a hard calcareous layer at 0.5 to 1 metre depth. Alkali soils have dominated presence of minerals such as Sodium Carbonate which causes the soil to swell. Please note that all alkaline soils are basic, but NOT all basic soils are alkaline. This is because even presence of basic salts, the soil may not become alkaline due to other chemical reactions. For example, pH of a solution can be lowered by the addition of CO2. This will reduce the basicity; however, the alkalinity will remain unchanged.

How Gypsum helps in Treatment of Alkali soils?

Gypsum (calcium sulphate, CaSO4. 2H2O) can  be applied as a source of Ca++ ions to replace the sodium at the exchange complex in the soil. However, there must be enough natural drainage to the underground, or else an artificial subsurface drainage system must be present, to permit leaching of the excess sodium by percolation of rain and/or irrigation water through the soil profile, while using Gypsum.

Soil air is vital both to soil itself and to organic life within it. A certain amount of air is contained between the individual particles except for the waterlogged soils. The air in the soil helps in the process of oxidation which converts part of the organic material into nitrogen in a form readily available to the plants.

On the other hand, too high degree of oxidation may consume so much organic material that the soil becomes increasingly sterile.

Soil fertility is the ability of soil to sustain plants. Soil has fertility when it contains organic substances and clay minerals that absorb water and certain elements needed by plants. The boundary between horizons is usually visible in the field, using the properties of colour, texture consistency, porosity, the presence or absence of certain minerals, moisture, and chemical processes.

Soil horizons are the building blocks of soil classification. The various layers exposed in a pedon; roughly parallel to the surface and identified as O,A,E,B, and C are known as soil horizon. 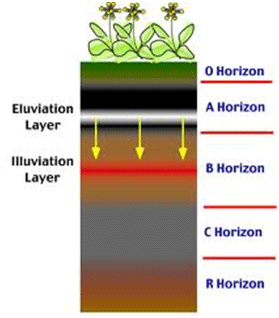 The final layer in a typical soil profile is called the R horizon. This soil layer simply consists of unweathered bedrock.